Kim Cordova, the Executive Director of the Utah Commission on Criminal and Juvenile Justice (CCJJ), is responsible for coordinating and implementing criminal justice policy in Utah—a monumental task that requires her to work with all three branches of the government, shape legislation, and craft innovative policy initiatives. She draws on her unique life experiences as well as her expertise in criminal law to make Utah a safer and more equitable place to live and work.

But, Cordova almost didn’t become a criminal lawyer. When she was younger, she did not know any lawyers or professionals. As a result, she didn’t initially consider a career in the legal field.

“My mom is an immigrant and all of her family is still in Korea,” Cordova said. “And on my Dad’s side, there were unhealthy, dysfunctional family patterns . . . I knew that was not what I wanted.”

Even early on in elementary school, Cordova recognized that education would be the key to achieving what she wanted. Her mother left for work every morning at 4:30 a.m. after making meals for the children. Cordova was responsible for getting herself up, getting ready for the day, doing her homework, and walking to and from school. Her precocious independence and hard work was not lost on her teachers.

“My elementary school teachers took an interest in me, and I did well in school,” she said. “I can name them all— that’s how important and influential they were. They reinforced that I could do anything.”

After graduating from high school, Cordova was one of the few in her graduating class who went on to college. She attended Westminster College with an eye toward medical school, but her true love was the humanities. She found a middle ground in psychology. 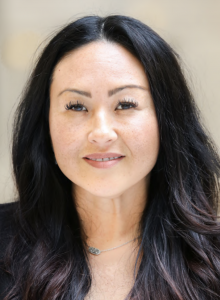 “My elementary school teachers took an interest in me, and I did well in school,” she said. “I can name them all —that’s how important and influential they were. They reinforced that I could do anything.” — Kim Cordova

After graduating, Cordova worked as a counselor in youth corrections and then transferred to youth probation. Her plan was to get experience in counseling and then pursue a graduate degree in psychology. In youth probation, she worked closely with Judge Andrew Valdez, a juvenile court judge. Judge Valdez had been a criminal defense attorney and was one of the first Latinx persons appointed to the Utah bench.

“He called me into his chambers one day and said, ‘What are you doing?’” Cordova remembers. He told her that she needed to take the LSAT and go to law school. “He told me I could be a great lawyer,” she said.

“He [Judge Andrew Valdez] told me I could be a great lawyer.” — Kim Cordova

That slight nudge was all that Cordova needed, and she was soon enrolled in the University of Utah law school. During law school, she found that she was drawn toward the subjects that most affected vulnerable people in tough situations.

“Contracts, property, torts. None of that stuff remotely interested me,” Cordova said. “Parental rights, death penalty, fifth amendment, Miranda, constitutional law— that was interesting. She also made friends for life.

“I think there were approximately 120 in my class. There were only about six of us that were students of color. Somehow, we all found each other that first week. I still know how they all are . . . They were really my source of support the first year. We did everything together.”

After graduating, Cordova built on the friendships she made in law school to form a strong, professional support group.

“Those relationships that began in law school, we continued to be connected and support each other over the past two decades,” Cordova said. “Whenever we’ve met any other women and women of color who we could connect with professionally, we have taken them in and brought them along with us. So our support group consistently grows.”

She knew Ed Brass, an experienced defense attorney, from her work as a prosecutor. Brass asked her if she wanted to work with him.

“Again, there was another person, another mentor, who saw something special about me who influenced another career path,” Cordova said. “I learned a ton. I was able to practice across the state in justice, district, and federal court.”

Walking into courts where she was unknown in different parts of Utah was an eye opening experience, Cordova said. “I was consistently referred to as the interpreter. For everyone who didn’t know me, the first question was, ‘Are you the interpreter?’”

“I was consistently referred to as the interpreter. For everyone who didn’t know me, the first question was, ‘Are you the interpreter?’” — Kim Cordova

Once court personnel and other lawyers got to know Cordova, however, things were different. “After we were able to show our level of ability and professionalism, I was greeted much better.”

Brass said that working with Cordova improved his practice of the law. “Through the force of her personality, she compelled me to be the best lawyer I could be every day,” he said. “Her commitment to people who would otherwise be forgotten or neglected burns in her.”

“[Cordova] compelled me to be the best lawyer I could be every day. Her commitment to people who would otherwise be forgotten or neglected burns in her.” — Ed Brass, Criminal Defense Attorney

After practicing with Brass for many years, another mentor, Ron Gordon, general counsel to Governor Herbert, nudged Cordova to a different path. After getting to know Cordova during her service on the Third District Judicial Nominating Commission, which Gordon staffed for the Governor, he tapped her to take his recently vacated position as Executive Director of CCJJ.

“She took her statutory charge to nominate the five most qualified candidates seriously and approached that charge with an incredible perspective that included both the importance of the Judiciary as a whole and the importance of justice in individual cases.” Gordon said.

He continued, “I always appreciated listening to her talk about the candidates because of her ability to analyze the big picture without ever losing sight of the work that goes on in individual courtrooms every day and the impact that has on the people appearing in those courtrooms. She brings that same perspective to everything she does which makes her an excellent leader and an incredible asset to the State.”

“[Cordova is] an excellent leader and an incredible asset to the State.” — Ron Gordon, General Counsel to Governor Herbert

Brass is equally pleased to see how well Cordova is now serving the State of Utah in her new position. “She now raises the level of the system as a whole the way she once raised our law practice,” he said.

Cordova believes that you have to pay attention to mentors who offer timely opportunities and build on connections to help improve diversity and inclusion in Utah’s legal profession.

“We have to have connections,” she said. “I’m a firm believer that as you move ahead as a person of color, as a woman, you have to open doors and bring people with you.”

“I’m a firm believer that as you move ahead as a person of color, as a woman, you have to open doors and bring people with you.” — Kim Cordova

Even though many challenges lie ahead, Cordova is optimistic about the future of diversity and inclusion in Utah. “When we’re talking about diversity on the bench, the way that women lawyers are organizing and supporting women, I think it’s had a tremendous effect” she said. “I also think the Governor has put people in positions who understand and appreciate the value of diversity.”

The important thing to Cordova is that groups like UCLI and others continue to drive the conversation forward about diversity and inclusion.