A message from a law student: Alexander Sánchez

When I was five-years-old, my family and I relocated to Salt Lake City, Utah, in hopes of starting a new life. At the time, my mother and father were in search of affordable living and better employment opportunities outside of California. Due to the Salvadoran Civil War of the 1980’s, my parents migrated to the United States as undocumented immigrants. The initial socio-economic and cultural disadvantages my parents faced in a new country, prevented them from introducing me to more effective educational tools needed to succeed academically throughout my primary education.

As the oldest son in my family, navigating through school life and my responsibilities at home did not come naturally. Growing up, my parents were often left with no choice but to rely on me to care for my younger siblings while they worked. At age seven, translating documents and interpreting phone calls for my parents became a common task. And due to the language barrier that my parents faced, I was often unable to ask them for assistance on assignments and was left to figure things out on my own. I never knew how to seek out assistance in school and, for some time, I was able to get by on my own. As a first-generation college student, the challenges I faced at home and at school were very stressful and they made me grow as a person, especially when navigating through two different cultural worlds.

“As a first-generation college student, the challenges I faced at home and in school were very stressful and they made me grow as a person, especially when navigating through two different cultural worlds.” — Alexander Sánchez

The thought of college seemed unrealistic to me and was not a thought I had fully entertained until my senior year of high school. The idea of attending college only came after my high school guidance counselor asked me what my future plans were after graduation. This was the first time I had ever spoken with anyone about pursuing a higher education and the first time anyone had ever asked me about it. This counselor became my mentor and she assisted me greatly in getting sponsored into the University of Utah, through a program ran by the Center for Ethnic Student Affairs. Every year, the center would sponsor only 100 students. The program was intended to provide academic opportunities to those underrepresented students who did not meet the initial admission criteria, but who demonstrated academic potential.

One year later, that same mentor wrote a recommendation letter that dramatically helped me in being selected as a full-ride scholarship recipient. I was fortunate enough to receive the Gail and Larry H. Miller Enrichment Scholarship, which covered my undergraduate tuition completely. The directors of this scholarship also provided me with an overwhelming amount of support and guidance.

Nonetheless, I was clueless as to what steps to take in pursuing a legal education and did not personally know of any attorneys or judges that looked like me or of anyone that I could get in touch with. Through a family friend, I was able to obtain a temporary position at the firm, Brown, Bradshaw & Moffat. This was my first time being introduced to a law office and the first time I was able to work with attorneys. I knew very little about the law, but the attorneys were willing to give me an opportunity to learn and to prove myself. The genuine support and feedback that I received from these mentors further inspired me to apply to law school.

A year ago, I was debating whether I should move to Moscow, Idaho to finally pursue my dream of becoming an attorney. The thought of leaving my loved ones behind to relocate to a small town located in the panhandle of Idaho was daunting. Yet, when given the chance to pursue my calling, it was all the motivation I needed to move outof-state. Although I flourished academically at the University of Idaho College of Law, I missed Salt Lake and the legal network I used to be a part of. After my first-year law grades were posted, I decided it would be worth a shot to attempt to transfer down to the University of Utah’s S.J. Quinney College of Law. As a transfer student, I thought I would have a better chance of being accepted at the law school for my second year, since only my first-year grades were being considered as opposed to my initial average LSAT score. Fortunately, I was accepted as a transfer student this year.

The same summer that I applied to transfer to S.J. Quinney College of Law, I was given the opportunity to work for the firm, Conyers & Nix, as a law clerk. This opportunity was invaluable as the attorneys allowed me to shadow them in court, in jail, and in the holding cells. I was also given wide latitude to work on the preparation of several criminal trials for our clients. I am grateful that these attorneys took a chance with me and that they were willing to take the time out of their busy schedules to show me what they know and how they apply that knowledge. This mentorship allowed me to get a better sense of what a practicing criminal defense attorney does on a daily basis in and outside of the office.

Prior to attending college, I had not realized the importance of having role models. Without all of the amazing mentors in my life, I cannot confidently say that I would be in law school or in the same academic position as I am now. I strongly believe in the importance of role models for younger students that are pursuing a legal education, particularly those students that are first-generation and have no one in their family who has ever attended college, let alone law school. Many of these first-generation college students are in great need of mentorships that will provide them with guidance on how to navigate the law school application process, pursue academic advising, and seek out financial assistance.

“Without all of the amazing mentors in my life, I cannot confidently say that I would be in law school . . . I strongly believe in the importance of role models for younger students that are pursuing a legal education, particularly those students that are first-generation and have no one in their family who has ever attended college, let alone law school.” — Alexander Sánchez

My goal is to eventually work as a public defender for the Salt Lake Legal Defender Association and to one day practice immigration law. As a first-generation college student, I am proud of myself for completing my first year of law school. My first year made me grow as a person and made me realize that persistence and hard work can pay off, but only if you are willing to make sacrifices. I never thought it would be possible to attend law school and I am grateful to the many people in my life who have opened up so many doors for me. It really does take a village to raise a child, or in my case it has taken a village to get me this far in my education. 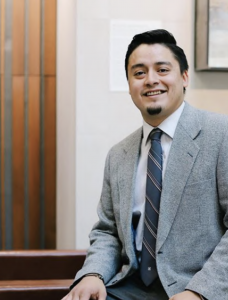 Know a law student who should be featured in the next issue of Mosaic? Email us at .