Born in Provo, Utah and raised in American Fork, Emily Zárate always knew she wanted to become a lawyer. Her background as a first generation Mexican American student motivated her desire to pursue the field of law through her exposure to the field. Her father’s incarceration, which took place when she was at a young age, meant Emily was translating and reviewing documents with lawyers at a court of law. This was where she was first introduced to the legal processes.

Emily graduated May of 2022 from Utah State University with a Bachelor of Science degree in Political Science and a Certificate in Law and Society Studies. After becoming involved in USU’s pre-law club, Emily was introduced to UCLI through their pre-law symposium. It was then that she realized she loved everything about UCLI’s work, especially in diversity and inclusion. During her early experience in a court of law, she became discouraged at seeing judges, lawyers, and interpreters who were for the most part white men. However, one day, at the court, Emily noticed there was a Latina woman who was an attorney. She says “And I remember that day because I was like “I can do this. I can totally do this. She looks like me, she talks like me, she’s in the field that I want to practice in”. That was the little push that I needed”.

Emily hopes to obtain her JD in 2023, either specializing in technology, immigration, or criminal justice law. Her skills in technology as a social media coordinator for university associations piqued her interest in technology law, while her father’s incarceration inspired her to consider criminal justice law. Finally, Emily’s aspirations for immigration law stem from her immigrant parents, family, and community’s support for her studies, which she said could not have been possible without them. “I just want to be able to give back to my community because they’ve uplifted me so much. If it wasn’t because of my family and community I wouldn’t be where I am now.” 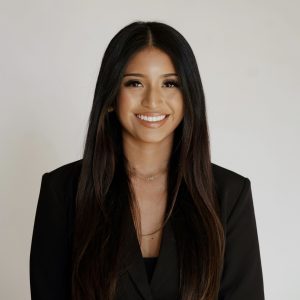