Beginning in March 2019, UCLI assembled a group of attorneys and judges to serve as the UCLI Mentoring Task Force. Over the past several months, the Task Force has begun efforts to create an evidence-based, comprehensive mentoring program to benefit diverse Utah students beginning in K-12 schools and continuing through the early years of legal practice.

To lay the groundwork for this program, the Task Force enlisted law students to research best practices among various mentoring initiatives. Based on the research, the Task Force plans to utilize a team mentoring approach, with the aim of facilitating opportunities for each student mentee to develop ongoing relationships and to build a broad professional network that can provide helpful resources throughout all stages of the educational process. The Task Force has begun its efforts by testing certain ideas in a pilot program scheduled to run through the 2019-2020 school year. The Task Force is excited to report on the following efforts that highlight the work of our volunteers thus far.

“[T]he Task Force plans to utilize a team mentoring approach, with the aim of facilitating opportunities for each student-mentee to develop ongoing relationships and to build a broad professional network that can provide helpful resources throughout all stages of the educational process.” — Melinda Bowen

First, volunteers have connected with students at multiple K-12 schools around the state to begin exposing students to the law and the legal profession. Sean Brown, Andy Morelli, and Melina Shiraldi visited a sixth grade class at Meadowlark Elementary School. During their time with the class, these three attorneys shared their personal stories, their experiences as they made the journey through law school, and their insights about specific legal careers.

The experience, however, was not limited to the classroom; the volunteers also joined the kids in a kickball game at recess. And the students’ exposure to the law will not end with the classroom presentation and the kickball game. The class has scheduled a field trip to the University of Utah this spring, with a guided tour of the law school as a special highlight.

I also visited St. Francis Xavier Catholic School, where I spoke with students in both elementary and middle school classes, and guided interactive presentations on the law as a profession and specifically on the First Amendment and its relevance to current events. Melina Shiraldi and I provided similar presentations at Alta High School, where we visited for Constitution Day. The Alta event included three separate discussions: one with a larger group of students during an advisory period, along with two smaller classroom presentations in a Latinos in Action class and in a Legal Research class.

Before the end of the school year, one of these classes will also take a tour of a local court, with the hope of further exposing students to different aspects of the legal profession. In the coming months, volunteers will also coordinate with personnel at East High School and Valley High School to schedule similar presentations at these schools, and to begin developing a long-term program that will provide schools with a list of potential events and resources that the UCLI Mentoring Program can offer to each school that chooses to utilize our volunteers.

In the realm of undergraduate students, UCLI has begun meeting with contacts at both the University of Utah and Brigham Young University, to develop relationships with existing undergraduate programs where UCLI volunteers can lend support. Similar meetings are in the works with other schools, such as Utah State and Weber State Universities.

The Task Force has also begun its mentoring efforts with college and law students. Julie Nelson recently joined as the Chair of the college student tier and is building strong ties with diverse college groups across the state. Under the direction of Heather Thuet, the law student tier Chair, and thanks to the generous $1,500 sponsorship by the Litigation Section of the Utah State Bar, four law student UCLI mentees from both the University of Utah and BYU law schools attended the Litigation Section’s Judicial Excellence CLE and Shenanigans in Moab in October. The Task Force extends a very special thanks to the Litigation Section for making this opportunity possible for our students!

The Task Force is anxious to continue these and similar efforts, and to build on them over the coming months. The full UCLI Mentoring Program will launch at the beginning of The 2020-2021 school year. We are thrilled about the Mentoring Program and the results we’ve seen thus far, and we’d love to have you aboard. Sign up today! 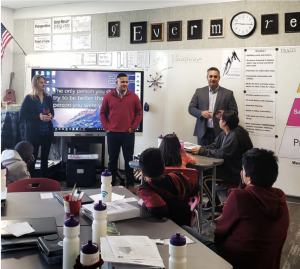