By Kacey SorensonJuly 2, 2021News
No Comments

On June 30, 2021, UCLI’s Associate Director Kacey Sorenson sat down with Ivan Brea, 2021 Program Development Intern, to hear more about his story. Ivan is an animated, thoughtful, unfailingly kind individual who signs off all of his emails with generous gratitude and infinite energy. We have loved having him on the team, and were so excited to get to know him–– and he did not disappoint.

Ivan was born in New York City but was predominantly raised in El Paso, Texas. He is Latino and is a child of immigrants–– his father from the Dominican Republic and his mother from Nicaragua. He is currently a student at New York University, and is pursuing a degree in Politics and a double minor in Public Policy and Spanish. His identity as the son of immigrants has been foundational in shaping his identity and is foundational in his hope to give back to his community in giving care to the marginalized. This hope, of caring for the marginalized, is what inspires his desire to go to law school and to study and change policy in order to make the United States better for everyone.

In discussing how his parents’ backgrounds have shaped his identity and worldview, Ivan pointed directly to watching his parents go through the “long and hard and expensive process of immigrating to the United States.” This experience “taught [him] from a young age that not everyone in this country and this world are on an equal playing field,” and seeing “how they had to adapt, how they had to learn English, how they had to navigate this new country of theirs really opened [his] eyes to the reality of life.” In essence, seeing his parents’ experience “really taught [him] to care for others because you never know what someone might be going through.” This is what motivates him, then, to get involved with his community, build it out to be more inclusive, and to “create an amazing life for everyone.”

From a young age, Ivan saw “The Law” as “something inherently negative.” He was taught that the law was a tool used to punish. It was in his teenage years that he heard stories of  Supreme Court Justice Sonia Sotomayor and Supreme Court Justice Ruth Bader Ginsburg that he realized the law is “an amazing tool that can actually be used to uplift communities, rather than harm communities.” It was when he learned these stories that he realized he wanted to pursue the law: he realized that it dictates how all of us live our lives, and that it can be used to create a more inclusive and healthy society. “It’s the law that gave us the right for same-sex marriage; it’s the law that gave us civil rights that we have today; it’s the law that makes immigration easier or harder in this country. Seeing how the law could be at the root cause of many of our current issues was something that inspired me to pursue a career in the law so that I am able to create a more just and equitable society for everyone. It’s that pursuit of justice that can be found in the law that’s made me want to pursue a career in the law.”

As someone who identifies as a bisexual person, Ivan feels it’s very important to be aware of these laws. He spoke about the 2020 Supreme Court decision that said firing workers because they are LGBTQ is unlawful discrimination, recent court cases regarding conversion therapy, and the 2015 decision to allow same-sex marriage. With how recent all of this still is and with how many communities there are, he concluded that “We have so much work to be done for various communities.”

When he considers his future in the law, Ivan wants to pursue public interest law, saying that he “sees the law as a tool that can be used to uplift communities.” In his words: “I am not so much interested in practicing law just because I want to practice law, but really because I have an interest in the law, a passion for the law, and also a passion for helping others and uplifting communities.” While not sure how his passion will unfold in terms of public interest, he does have a particular interest in criminal justice law. He spoke to some of the common conditions of incarcerated individuals in the United States, both historical and recent, concluding that “thinking about the rights of incarcerated people has always been something in my mind, especially when connected with racial justice.”

In describing his experience as a UCLI intern, Ivan says that his experience has “been nothing short of a pure joy.” (Don’t you love him?) “One of the greatest things about the internship is the people. It’s amazing to work with such diverse, talented, hardworking and passionate people–– the organization has been nothing short of a pleasure to work with.” In speaking about his fellow interns, it’s “inspiring to see these people wanting to create a better and more inclusive Utah.” The projects he’s been assigned, he says, have given him a hands-on look at the kind of work that a nonprofit conducts, from social media to programming, from beginning to end. “I’ve learned a lot of leadership skills, and how to navigate everything a leader has to navigate, whether it’s something as small as scheduling to something as big as the actual leading of a project.” In summary, he said, “a UCLI internship is very much not a paper-pushing, coffee-bringing internship. It’s very much a hands-on, collaborative internship, which I just think is incredible.” After this internship, he says, “I will be ready and able to be a leader in every sense of the word.”

When discussing the impact that diverse and equal representation in the legal profession could have on the justice system in the U.S., Ivan believes that “it will change everything, and in the best of ways.” As the justice system currently stands, Ivan believes that it “quite frankly isn’t a justice system: the discrepancies that we have are not ‘flaws in the system,’ they are by design […] by having a more diverse and inclusive justice system, we’ll find that we are able to create a more just and equitable society for everyone. When you have people who are system-impacted join the legal profession, I think you will find a more sympathetic system, and one that really values people [and] justice, compared to valuing the system. I think that will make all the difference.”

After his experience with UCLI, Ivan says he will return to NYU “with a flame and a bigger motivation to help my community and be in the service of others in any way I see […] I’ll hope to bring a newfound sense of activism to the social, political, and cultural clubs I’m involved in.” Eventually, Ivan hopes to go to law school, become a public interest lawyer, and “really put [himself] in the service of others.”

You can find Ivan on LinkedIn at linkedin.com/in/ivan-brea/ 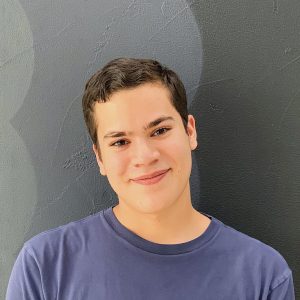