Alex Sanchez is a law school graduate currently preparing to take the bar in Utah. He grew up in a hard working family with both of his parents working blue collar jobs all of his adolescent life. Although he is a native of California with strong familial roots in El Salvador, Alex moved to Utah at an early age so Utah is where he calls home.

Alex was fortunate enough to have many doors open on his way to law school. When he was entering high school, he was given the opportunity to get a scholarship to go to a private Catholic school. At this school, he found a school counselor that really took an interest in his future success. This counselor put the University of Utah on Alex’s radar as a potential landing spot for his post secondary education. At the urging of his counselor, Alex applied and not only got accepted to the University of Utah, but got a full ride through a Larry H Miller scholarship. Originally Alex wanted to graduate and pursue a profession in social work, but after Alex was exposed to law work through his time as a legal assistant, he realized that the law field was the direction he wanted to go.

Alex’s journey in the legal field is not over. He still needs to pass the bar and achieve his dream of becoming a public defender. He really feels that he could make a difference as a public defender, both as an advocate for the Hispanic community and promoter of criminal justice reform.

UCLI has had the fortunate opportunity to help Alex with his journey through law school and in his preparation for the bar. While in law school, Alex decided to start an organization for first generation law students. He described UCLI as extremely beneficial to the success of the organization because of UCLI’s help in event planning and funding. UCLI was also able to help members of the organization by providing resources on how to be successful in law school. Personally, UCLI has also been able to help Alex directly in his bar prep. Unfortunately, the bar entrance fee as well as exam prep resources are extremely expensive. UCLI was able to pay for the entrance exam and fund the resources Alex needed to study for the bar. 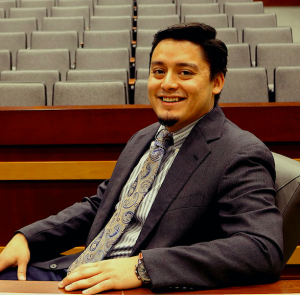 To stay in the loop on future UCLI scholarships, subscribe to our newsletter!