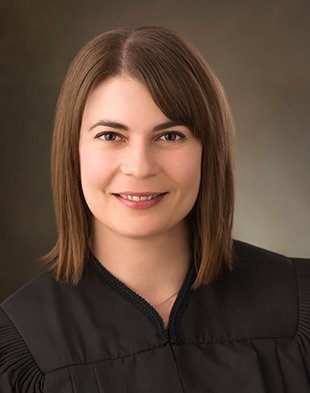 Justice Paige Petersen was appointed to the Utah Supreme court in December 2017 by Governor Gary Herbert. Before joining the Supreme Court, she was a district court judge in the Third Judicial District, which serves Salt Lake, Summit, and Tooele counties. Justice Petersen graduated summa cum laude from the University of Utah in 1995, after first obtaining an associate’s degree from the College of Eastern Utah in Price. She received her law degree from Yale Law School in 1999. After graduation, she clerked for two years in the U.S. District Court for the Southern District of Ohio. After her clerkship, she joined the law firm of Simpson Thacher & Bartlett in New York City, practicing civil litigation. She then transitioned to criminal law, serving as an Assistant U.S. Attorney in the Eastern District of New York in Brooklyn. There, she handled cases involving organized crime and international narcotics trafficking. Petersen then prosecuted war crimes at the International Criminal Tribunal for the Former Yugoslavia in The Hague, Netherlands, where she was a member of the trial team responsible for successfully prosecuting the former Serbian Chief of Police for ethnic cleansing and mass murder in Kosovo. She then returned to Utah and joined the U.S. Attorney’s Office in Salt Lake City, where she prosecuted violent crimes for three years before taking the bench.